I you have been paying attention you may remember that I “finished” my N-Zeta before Xmas. It ran, but was very hard to start – only way to get it going was to squirt some fuel into the plug hole. Discussions with the local JAWArati implicated the crankcase seals, items I had not replaced during the engine rebuild. Being a 4 stroke kind of guy I underestimated the importance of keeping the crankcase airtight. I replaced the easy seal on the generator side which improved performance, but not starting. So, in January I dropped out the engine and stripped it right down – again, including removing the bearings. The strange aluminium “labyrinth” seal between the two clutch-side mains was totally devoid of oil and had chunks of metal missing from the ridges. Happily, Alan Cleaver in Cromwell had one in stock for about $15. While I was at it I decided to replace all other seals and bearings and these were all available locally – $77 for the five bearings and about $30 for the seals. The bearings were the sealed for life type so I took out the plastic rings – I think sealed bearings are only good for wheels etc. and not the higher speeds in an engine.

Put the engine back in and bugger me it started first turn of the key! Also, using silicone instead of paper gaskets made the engine oil leak free – it had leaked before.

The other issue was that the generator did not work first time round, and the starter only worked sometimes. I replaced it with a rather scruffy looking one from a spare engine I had picked up on Trademe. Was very pleased when the ignition light went out and the starter works perfectly.

Another annoying little issue was that the carb would leak on standing if you did not turn the fuel off so I decided to buy a new original carb form Czech land – was not very expensive. About 44 euro. Strangely, it had a little hole in the choke tube which seemed to make it hard to start. Old carb had the same hole, but it had been sealed off  – looked like form new. So, I sealed the hole with some JB weld and now it starts easily on the choke.

At this stage I was ready for the dreaded re-vinning process, but first decided to try and recover the original number plate. Land Transport said no because I did not have any papers, even although I had a receipt and a picture of the bike as received with the plate attached, and the number was available. I appealed pointing out that they had let me reuse the plate on my 1949 BSA Bantam under exactly the same circumstances. She responded, “that was a mistake”- this was the same woman from the BSA exercise! I now realise that arguing with land transport is like wrestling with a pig in mud – the pig really enjoys it. 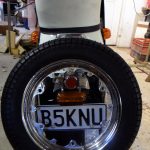 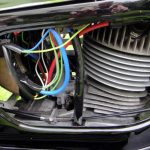 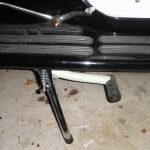 So I was all ready to go for the re-vinning, when I partially ruptured an Achilles tendon which meant I could not even get it off the centre stand never mind wrestle it onto a trailer. Even with two good legs I have always struggled getting it on and off the stand – no idea how the pretty little Czech girls you always see in the CEZETA ads managed it. I can see why they went with a side stand for the 502.  Anyway, while I waited for the tendon to heal I decided to try and fit a side stand while keeping the centre stand which is handy for maintenance. I do have an original 502 stand, but fitting it so it did not foul the centre stand looked like a bit of an engineering challenge. So, in the end I bought a nice chrome Harley side stand on Trademe and bolted that to the running board with two cap screws. Had to shorten it a bit, but it works well and flips up forward out of sight under the front guard.

Finally got to the WOF place three weeks ago. Was showing them how to work the lights etc. when the guy said “the stop light needs to operate with both the front and back brakes” which seemed like a major problem, but luckily an older and wiser inspector appeared and said back brake light only is fine on bikes of this age. I had also omitted to fit a reflector, but the let me off with that on the condition I fitted one. Found a nice little Lucas one on Trademe that fits perfectly inside the trailer hitch/spare wheel carrier. So that was it – finally legal and one more N-Zeta returns to the road. Total cost of revinning $339.82 including WOF and one year’s registration. Total cost of restoration? I stopped counting a while ago, but I think about $8,000.

Thanks for your help and advice over the last few years. 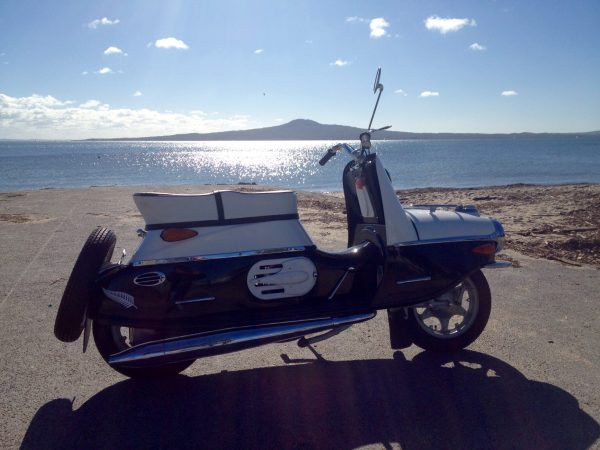