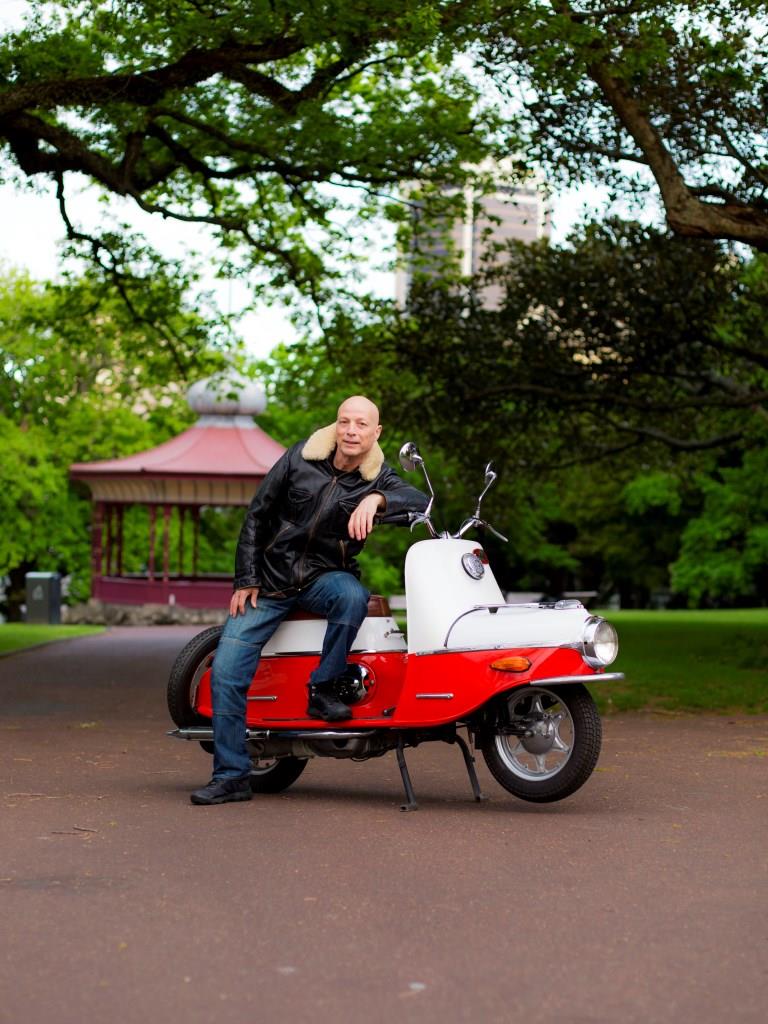 In the early 70’s as a teenager, the first motorised transport I had was a scooter. I spent my teenage years zipping around on a Vespa. I’ve always had a soft spot for scooters. I fell in love with their heritage, their distinctive personality and ease of riding.

Fast forward thirty years. In 2010 I spotted a clapped-out scooter on Trade Me. It had a long nose, ending in a single car headlight. I was enamoured with it’s odd looking shape. But the truth is, I had no idea what this thing was. The scooter had an oval badge on it. I looked closer. And discovered it was an … Nzeta. I was astonished to find it was a genuine piece of Kiwiana.

On a whim I bought it. I thought: I’ll ship it to Auckland and restore it. Only later, as I pushed the scooter off the back of the delivery truck, did it dawn on me I had neither a garage, tools, nor know-how to pull this thing apart and rebuild it. That was the beginning of a journey that took ten years.

Outsourcing the restoration of a scooter is not for the faint hearted. A local scooter mechanic removed the Nzeta’s 175cc Jawa engine, and, over the next five years, it travelled up and down the country in pursuit of someone who could rebuild it from scratch. It went from Christchurch to Auckland to Dunedin. Up to Whangarei and down to Pukekohe and then to Manukau. There were many who over promised and undelivered.

The engine was fitted with new bearings, seals, piston rings, and chain. The barrel was re-bored. The clutch was renewed. The gears adjusted. Wheels were refitted with high-tension bolts. And the seat was remade in a beautiful tanned leather, honey brown, with an orange peel texture. I bought the hide myself and delivered it to the upholsterer with a pattern I drew on the computer. I meticulously studied images of original Cezetas and painted my Nzeta in two-tone – fire engine red and white.

Amazingly, I was able to source parts from the Czech Republic. I purchased new exhausts, footrest rubbers, mud flaps, and indicators. But every time my scooter came home, it was never quite roadworthy. I felt ready to give up. Then a chance meeting with someone who restored cars, suggested I send the scooter to a mechanic on Auckland’s North Shore. I had the scooter delivered there. My brief was simple: get this thing roadworthy.

A month went by. Lockdown came and went. Another month. Then two more. And then I got an email. It’s done.

Getting the Nzeta registered caused further consternation. There were no previously known NZ
owners. Working in conjunction with the Vintage Car Club, I filled in forms and signed a DOMAS certificate in front of a JP. The compliance center checked and recorded the chassis number. I filled in an NZTA Alternative Documents form and sent the package to New Plymouth for sign-off.

Eventually I got a warrant and a registration plate. The plate is CA6LM which is pure
coincidence. But I like it.

You need a lot of CALM to have a vintage scooter restored.

Today, the restored Nzeta sits in the basement of my apartment building, ready for the next stage of its life – and mine

I like the simplicity of scooters, their classic design and the quirky people that ride and restore them.
View all posts by Jim →
This entry was posted in Cezeta/NZeta. Bookmark the permalink.